Types of Assets in Accounting Explained

A corporation or any business owns assets, and they are the source that produce revenue. In accounting, assets are either physical or non-physical.

The types of assets can fall under any of these categories: tangible and intangible, current and noncurrent, and operational and non-operational. 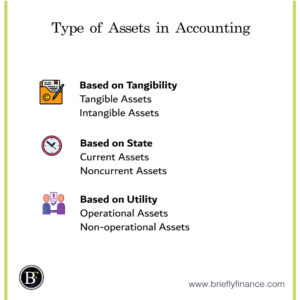 There are two types of assets based on physical existence: tangible and intangible. Tangible assets exist physically and can be sold off, damaged, or liquidated.

Intangible assets don’t have physical properties, but they contribute to a business’s operations and similarly can be sold off, damaged, or liquidated.

These are limited resources like real estate, vehicles, equipment used for manufacturing, and buildings.

These provide fundamental contributions to a business’ operation. For example, buildings house for workers and equipment, cars which are involved in logistics and distribution, equipment such as conveyor belts or production facilities help manufacture the product, and the raw materials used to make the product are all assets.

A cereal company’s logo and branding have intellectual copyright. Trademarks and patents are also intangible in nature.

Although stocks and bonds are, in concept, intangible, they exist only as long as there are physical contracts printed on paper, so they cannot fall under the category of intangible assets. However, intangible assets can be created and may or may not require resources.

In accounting, intangible assets are not included since they have no “book value,” – meaning there is no starting value, to begin with, and they only contribute to the operational capability of a business.

However, when a company purchases another company, the total valuation is usually higher than the book value because of the intangible assets.

Other kinds of intangible assets include trade secrets. This is a company’s procedures, modifications to publicly available information released by the company that doesn’t have physical forms.

Franchises are also intangible assets. They’re issued to individual entities that would like to use the same methods and trade secrets as the franchiser.

The franchisee only has a certification of the purchase of a franchise, but it’s not wholly reliant on the document. Instead, they’re included in the balance sheets as receivables if the franchisee agrees to pay specific percentages of their total profit.

Examples of current assets would be inventory. In our example of the cereal company, the raw stock inventory of corn is considered current since it’s actively used during the production of cereal.

However, these are also perishable goods and will no longer have inherent value after a year unless new technologies offer indefinite storage and preservation. Thus, the corn will, in all probability, become a noncurrent asset.

Other examples of current assets aside from stock inventory include accounts receivables, cash, and securities.

Cash is considered an asset because of its liquidity, and a company can access it anytime to settle similarly current liabilities. Hence, in accounting, cash is always on the first line of a book.

Securities are also considered current assets due to their volatility. It shares the same liquidity as cash and can be accessed, just not as fast. It doesn’t have purchasing power, but it can be traded for cash, becoming liquid.

Money orders are current assets even though they’re not as easily accessible as cash. Conceptually, they’re very similar to securities since they’re reliant on physical contracts, and that these contracts essentially become valueless if they’re destroyed.

Copies of money orders are possible, but that would constitute fraud, so they’re also classified as tangible assets. Cheques work the same way.

Noncurrent assets’ value is only realised after a year. But, again, this is because they’re not as liquid as other types of assets.

The only way noncurrent assets can be liquidated is if they’re under acquisition, such as when a company sells everything to another company.

Examples of noncurrent assets include real estate, intellectual property rights, facilities, and equipment used for production or services. It’s the entirety of the company in terms of physicality and what’s used to render service or manufacture the product from.

These cannot be actively sold for profit since their values only become relevant if they grow enough.

Going back to our example of a cereal company, operation assets including the mill, conveyor belts, the cooking equipment, storage facilities, and other things needed to make the cereal.

Operational assets can also fall under tangible and noncurrent assets as they physically exist and cannot be liquidated quickly. However, cash is also an operation asset used for purchasing other operational assets.

Other examples of an operating asset would include patents and copyrights. Patents are considered operational assets since it affects how a company conducts its business or makes its products.

Therefore, once a patent expires, they cease to become operational assets and would have to be renewed.

They’re excluded from a balance sheet since they’re not included in expenditure, although cash will always be seen as an operational asset on the book’s first line.

All other assets that don’t take part in the daily activities of a company are called non-operational assets. This includes extra equipment in stock.

While they may be part of stock inventory and may be considered operational assets, the time difference of using raw materials every day compared to replacing equipment every six months is enormous. This makes extra equipment fall under operational assets.

Vacant lots or lands are also considered non-operational for apparent reasons. However, if they’re used for parking and logistics or as a kind of storage space, then they’re categorised as operational assets.

Although cash is an operation asset, anything that’s not used during the company’s day-to-day activities is considered non-operation.

For example, underutilised cash is usually added to operating assets instead during appraisal before company acquisition.

Similarly, cash lent to borrowers is a non-operation asset since it cannot be accessed, that is, until they’re collected. Securities created by a company also fall under non-operational assets since these don’t contribute directly to a company’s activities.

Instead, the company is using these as a way to raise funds.

Other Types of Assets

Other types of assets don’t fall under tangibility, utility, or state. These are called fictitious assets. Expenses and losses incurred during a company’s activities that have not been included in a balance sheet are fictitious. These include any of the following:

These items don’t actively contribute to increasing the valuation of the company. Fictitious assets are usually financial expenditures – they don’t take up physical space, cannot be sold off, or don’t have value even after several years.

Fictitious assets are usually written as miscellaneous expenditures and cannot be receivables or deductibles.

This list would be complete if liabilities were not mentioned. They’re the opposites of assets in terms of financial potential. They don’t bring revenue, but they’re resultant of a companies operations.

Liabilities are a company’s short-term responsibilities that need to be settled. In accounting, liabilities should equal the total of assets. A company’s total assets are the sum of both a shareholder’s equity and the company’s expenses, the latter excluding fictitious expenditures.

Knowing how to classify information in accounting is an essential skill to assist you in comprehending the communication with others in  different business sittings. I hope the above explanation helps you able to analyse the business conversations differently.